Part 6 The house in Wimberley, TX 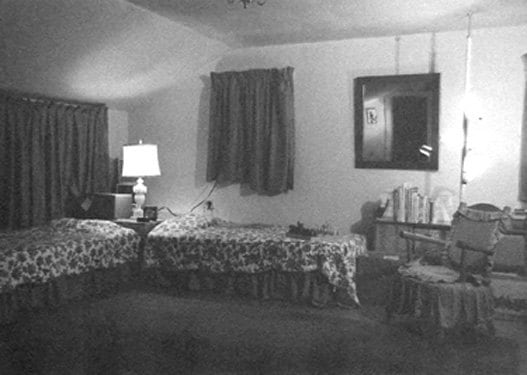 Part 6 The House in Wimberley: Picture MF 0074-33 (1964) While I was attending college in San Marcus, I found a little rent house in Wimberley. It was located close to the main house where an elderly couple lived. The rent was $50.00 per month (which my mother paid for me). There was a good location to park my darkroom and hook up electricity and water. The house was located on a country road not very far from downtown Wimberley. This allowed me to hike short distanced into the ’wilds’ with my camera. I did take a few pictures out there, one of which became my mother’s favorite. The drive to college and back on the two-lane highway was nice, and not too far. (Note: today, the old road has been replaced by a modern 4-lane highway. The reason for this: Too Many Crashes.) I think I should mention that my landlords were Baptists that did not allow drinking on the property. Which led to a sticky situation. One weekend, some college friends decided to buy a keg of beer and party at this house without telling me abort their plans. They arrived when I was not there, opened the keg and started drinking. Bad news for my landlords, me, and the party. When I come back ‘home’, saw what was going on, I ‘blew my stack’. Told then to get the hell off, and never do that again. I explained to my landlords that I had no knowledge of this ‘party’ before it happened, and would not have allowed them to come with a beer keg if I had known what they were planning.